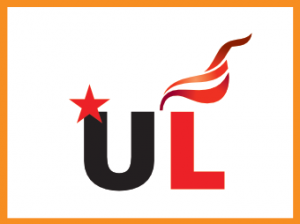 UNITED LEFT is a broad left organisation open only to Unite members. We are a voluntary organisation that links Unite shop stewards, union activists, convenors and Full Time Officers and staff in a network across Britain and Ireland.

We have a vision for a union which is:

We want a campaigning union that has a clear political voice, in the Labour Party but also beyond, demanding the changes needed to give working class people and their families a better deal and a more secure future.

We are socialists. We think that working people collectively must be in the driving seat, in control of the state, to create a society for the many and not the few.

We are for the overcoming of inequality through:

We campaign for socialist candidates in Unite elections to ensure our union is led by socialists.

We defend our Union’s Rule Book and give guidance at our Rules and Policy conferences on which motions and amendments should be supported to advance our union’s socialist agenda.

If you agree with our outlook – please join us.

RT @StrikeMapUK We have mapped over 5⃣0⃣0⃣ strikes in >2 years. ⛱️The summer of discontent has meant our map is struggling with the amount of action and visitors. 🆘We need your help to save strike map🆘 Donate now to save our map here>>actionnetwork.org/fundraising… #strikemapuk #savestrikemap pic.twitter.com/tfwHI56GfS

RT @SteveT_Unite Now joined by the fabulous @marykfoy … our movement, united in our demands to deliver real change for working people and our communities #Solidarity #DemandBetter twitter.com/SteveT_Unite/s… pic.twitter.com/WXF46K9ZFo

RT @ByDonkeys 211 Conservative MPs are fine with this 👇 pic.twitter.com/9bz1EYmXvk

We use cookies on our website to give you the most relevant experience by remembering your preferences and repeat visits. By clicking “Accept All”, you consent to the use of ALL the cookies. However, you may visit "Cookie Settings" to provide a controlled consent.
Cookie SettingsAccept All
Manage consent

This website uses cookies to improve your experience while you navigate through the website. Out of these cookies, the cookies that are categorized as necessary are stored on your browser as they are essential for the working of basic functionalities of the website. We also use third-party cookies that help us analyze and understand how you use this website. These cookies will be stored in your browser only with your consent. You also have the option to opt-out of these cookies. But opting out of some of these cookies may have an effect on your browsing experience.
Necessary Always Enabled
Necessary cookies are absolutely essential for the website to function properly. This category only includes cookies that ensures basic functionalities and security features of the website. These cookies do not store any personal information.
Non-necessary
Any cookies that may not be particularly necessary for the website to function and is used specifically to collect user personal data via analytics, ads, other embedded contents are termed as non-necessary cookies. It is mandatory to procure user consent prior to running these cookies on your website.
SAVE & ACCEPT